The Starfinders began the session with a complete tactical advantage. Thanks to Wesley’s cloaking systems, the Raza had gone completely undetected as it flew by the surrounding Corpse Fleet and closed with the only open hangar bay on the Stellar Degenerator. As they approached the hangar, they spotted several starfighters and their pilots milling about the bay. Beyond them was a control room in which there were three cyber-zombies and a Corpse Fleet officer supervising them.

After some debate, the group decided to make the most of the Raza’s offenses and launched a torpedo into the hangar bay. The Corpse Fleet was caught completely off-guard as the weapon blasted into the bay and exploded. The starfighters and pilots were destroyed but much to everyone’s surprise, a Kishaleen energy field appeared and protected the control room. Wesley immediately began to hack the hangar bay’s systems and shut down the shield. The Corpse Fleet officer fled through an ancillary door and disappeared from view. 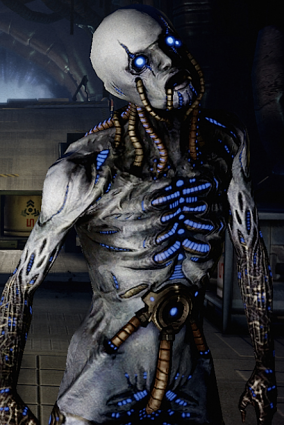 The Cyber-Zombies were jacked into the ship’s computers systems and were oblivious to the actions of the PCs. Cypher jacked into the computers and used them as a backdoor to hack into the three zombies and took control of them. The first one was trying to hack into the surrounding star system’s defensive weaponry in an attempt to shut them down. Cypher ended that process. The second was monitoring the security systems around the hangar bay (including video feeds). The third was monitoring Corpse Fleet communications and their forces moving throughout the Stellar Degenerator.

Cypher decided to use the third zombie to bluff the Corpse Fleet. He announced the Stellar Degenerator had grown unstable and ordered a full retreat. This caused immediate chaos. One of the “young” Corpse Fleet officers responded, “Admiral Serovox, this order confuses us. Why should we leave the Stellar Degenerator when we just claimed it?” A gravelly voice responds, “That is the Starfinders, you fool. Go back to your original orders and complete your mission.” Not all of the Corpse Fleet heard this exchange and while some returned to their missions, others began retreating.

Using the second cyber-zombie, Cypher located the Corpse Fleet officer who had fled from the control room. He hadn’t gotten far before he reunited with another unit. That unit opened a teleportation portal and the officer disappeared through it alone. The Starfinders had one trail to follow if they chose to do so.

The group debated what to do next and they wondered if they could use the controls here to destroy the Stellar Degenerator to deal with the Corpse Fleet swarming it. Cypher reminded the group if they did that, Wesley’s parents and the other Starfinders in the Scoured Stars system might be lost.

The group decided to leave one cyber-zombie behind to interfere with Corpse Fleet comms and took the other two with them. Wesley took out the laser trap he had scavenged from the cultist asteroid and set it up to defend the cyber-zombie they were leaving behind. They decided not to follow the Corpse Officer who fled but instead they would head to the Stellar Degenerator’s engineering section where they intended to take control of the ship. They also schemed to use their holoskins to disguise themselves as members of the Corpse Fleet. Only Drez did not disguise himself and instead posed as a prisoner.

The vessel was enormous and labyrinthine and it took all of Wesley’s engineering skills (with an assist from Nuil) to navigate the ship as quickly as they could. They noted as they moved most of the ship was not Kishaleen but Kishaleen technology had been merged with the control systems of the ship. They recalled the ship had originally been created by the Sivv before the Kishaleen had claimed it.

On the way to engineering, they happened across a second Corpse Fleet officer, a female human pale stranger, wielding twin pistols constructed of bone. She was in command of three “marooned ones” undead which were busy unloading crates. She turned to the PCs and with a disinterested demeanor, commented on how quickly they had captured one of the Starfinders. Cypher forgets himself and responds with a thick ysoki accent. The officer did not react and the group could not tell if she had noticed. She then commented on how pleased Admiral Serovox would be they had captured one of the breathers. She ordered to bring the prisoner to the nihili (marooned ones) who had not been fed yet that day.

Cypher pushed Drez forced and then the group broke apart and launched a surprise attack. The battle begins at the 58-minute mark in the video.

Cypher ducked behind some medical supplies for cover. Nuil scaled a nearby pillar. Drez burst into a run and tossed a grenade to land between the pale stranger and two of the marooned ones. Much to his surprise, the pale stranger’s eyes tracked him through the pillar and she was not surprised by the attack. Perhaps she had caught Cypher’s accent? She taunted, “You think I can’t see you wherever you are?” She fired on the vesk soldier just as the grenade landed near her feet. She could not avoid the blast and was sent reeling. Electricity and fire danced along the line of her attack and slammed into Drez with the round from her pistol.

Although outnumbered, the Corpse Fleet soldiers put up a good fight. The pale stranger, who revealed her name was Malakar, demonstrated the uncanny ability to enhance her attacks with her pistols with various energy types and the attacks passed through cover as if it did not exist. The PCs were defenseless against her attacks and quickly realized they needed to commit to an overwhelming offense. Drez activated his haste circuit and charged her which is when he discovered her defense mechanism, an aura which caused irrational fear in those it affected. The effect was too much for the vesk and he fled in fear before he could attack.

The rest of the group rushed the marooned ones while keeping their distance from Malakar as much as they could. They unleashed unholy hell on the undead threat and Malakar died with a snarl on her face.

The group finished their trek to the engineering section. There Nuil and Cypher hacked into the ship’s computers. Corpse Fleet technicians managed to briefly retake control of their communications and Admiral Serovox sent the Starfinders an ominous message. He was sending his forces to claim them but he was not going to kill them, he intended to transform them into undead and add them to his forces. Nuil and Cypher closed down as many passages as they could to force the approaching threat to come through a single route.

Nuil, Cypher, and Wesley began taking control of the Stellar Degenerator while Drez, Ryder, and Switch rushed off to set up defenses along the route the Corpse Fleet would take. The techies were able to quickly take control of the ship while the others steeled themselves for the inevitable attack.